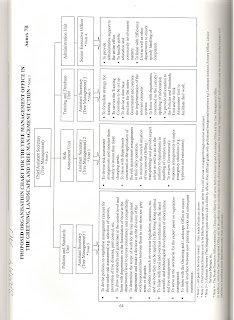 In the afternoon of 29.6.2009, ISA HK/China was called up to attend the briefing of the Tree Management Review of the Chief Secretary Office (CSO) just minutes ahead of the Press Conference to announce the same event. To the delight of the Station Manager, CSO announced that a new Tree Management Office (TMO) will be set up at Bureau Level to coordinate the future Tree Affairs in HK in liaison with various Govt Depts, alongside with the Greening & Landscape Office which will look after the greenery issues in HK. The proposed structure of the TMO is attached for general reference.

The TMO is known to be the first of its kind in Asia at such senior level in Govt. It will become a landmark for HK to show our neighbours & will have an impact on Tree Care to similar municipalities in our region especially China.

The CSO has indeed picked a good time to announce the TMO, & it practically met little resistance form the media & public because most were busy focusing on the 7.1 march just two days after. The media feedback was relatively mild, although the press were picking on minor issues like Tree Laws & Structure Duplication for greenery, which at the end did not arouse much public interest as a whole.

The Station Manager was invited to attend a Radio Talk Show at CR 1 & then a TV Live Forum in the morning of 30.6.09 to discuss the same topic. It was apparent that ISA HK/China was the only organization supporting the TMO while everyone else was on the other side. It was all but uneasy time & the Station Manager was feeling like the Royal Engineers fending off the Zulus in the Battle of Rooke Drift in 1879 (http://isahkchina.blogspot.com/2007/07/isa-hkchina-imaginary-arboricultural.html) .He was singing the 'Men of Harlec' all the way to cool his nerves & to stand by his principles.

It may be interesting to note that all who were against the TMO but none appeared to be players in the field, if they could be appropriately labeled as by-standers. ISA HK/China has not heard a single Station Member among our + 850 no. calling or writing in to oppose the TMO, & it is known that the majority of working Arborists in HK are in ISA HK/China. If laymen voices are to interfere with the professional opinion in the making of TMO, would it not be like the football fans making the Rules of the Game & not the Football Association or even the players? Or should the noisy passengers steer the boat for the Captain in uncharted waters?

It appeared that none of the critics has seen the genuine merit of the TMO as to release the Tree Management from the traditional Landscape System & place Tree Affairs back into the hand of the Arborists. Tree Planting involves public safety, & it can not be taken lightly as something to add flavor to the outlook. Trees must be designed, selected, installed, maintained, inspected & protected properly before they can become assets, or Mother Nature makes the Rules. Treatment such as Pruning without Diagnosis is Mal-practice. Arboriculture is a scientific discipline & unique enough not to be replaced or superceded by any other landscape discipline.

As now dust has settled & it's time to look ahead. We shall need to see the TMO to be managed by the correct personnel & to run in line with international practices. The future TMO will also need to work closely with ISA HK/China because we are connected to the +22,000 Arborists in ISA in +47 countries. ISA can supply a wealth of information, technology, management technique & education on proper Tree Care to the TMO unlimited & unknown by any other institute. If not, the TMO will be like trying to start up a Nazi Party in Israel, & the outcome will be soon & obvious.

In the opinion of ISA HK/China, the key to turn the tide for the media antagonism would be to offer many rounds of educational seminars on Modern Arboriculture to the public. Through CICTA programs, ISA HK/China has propagated correct Tree Care to thousands of candidates in the past few years in nearly every Govt Dept & within the local landscape industry. This is not enough & more should be given openly in public forum & discussion, to let the public understand what Modern Arboriculture is all about. In time, the public will come to support the TMO, after they have found out myths from truth under scientific research & technology.

The TMO is a beginning & not an end. The road ahead will be long & winding. ISA HK/China has gone through 4 difficult years to establish what we are today. The same will apply to TMO.

Maybe one day when the TMO is supported by the public & media in HK, Kitty Chong who raised herself to heaven in the Stanley Tree Failure may smile at us from above, & be called the Guardian Angel of the ISA HK/China Arborists, as she rightfully deserves.