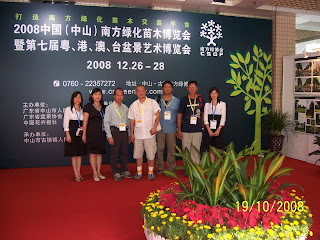 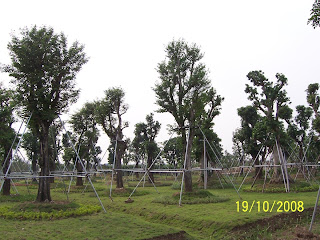 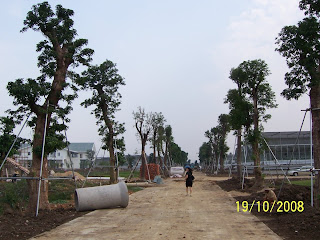 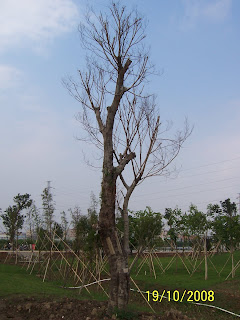 Two counts of recent events are hereby reported in Station Mail as follows:

Two Station Members, Deputy Station Manager Tony Ng & the Station Manager were invited by the CSGF Organizing Committee to pay a progress visit in Zhongshan on Oct 19 to discuss the display, seminar & demonstration arrangement. Details of the proposed itinerary are attached for general reference, although hardly anyone would know for sure what the final arrangement would be, not until minutes before the Show is due to begin on Dec 26, 2008.

It appeared that only one seminar can be arranged at the CSGF although we do not know how long the duration would be. On the other hand, ISA HK/China will be meeting with various local landscape institutes of China & exchanges will happen.

There will be a Tree Rigging & Chainsaw Operation demonstration given for ISA HK/China at the Show & the photo of the dead tree to get the cut is attached. Photos of Mature Trees installed on site with millions of RMB at the CSGF venue are also attached for interesting viewing. ISA HK/China will not make comments on these trees since we are greeted in as VIP by the enthusiastic host at the CSGF.

East Week Magazine has kindly come for an interview with ISA HK/China & TCHK last month, & a report has been published in this week's publication which can be bought over the news stand. The contents are self-explanatory, although the readers have to understand that any given information has been digested & filtered by the editors.

Please excuse the unclear printing of the article since they were compressed under a low resolution for e-mail transmission. Anyone who wants to read clear pages may have to buy off the magazine in a shop anywhere in HK.

East Week Magazine would usually have a circulation of +100,000 copies per week in Southern China & is usually displayed in public location like restaurants & hairdressers for coffee discussion.

We wish to thank East Week Magazine for taking interest in our activity & ISA HK/China loves publicity to promote ISA Arboriculture in our territory anytime.

Posted by China Arborist Association at 4:47 PM No comments:

Attached is yet another sad piece of news of a Tree Work Accident which happened to a TCHK Member who is well known to the Station Manager for some time already, although he is not yet qualified by ISA or any international organization. The identity of this young man is protected because we believe he will somehow climb again in future, although he has truly learned a lesson the hard way this time.

Since it happened to a close associate of the Station Manager in TCHK in this unfortunate accident, the Station Manager actually spent half day without pay yesterday to investigate the cause of the accident together with the Labour Dept Inspectors who was there in a duty call. This accident was also widely reported in the press & in the internet news in HK.

After studying the tree, the equipment & the reported technique, it appeared to the Station Manager that it was a case of misjudgement by the Tree Climber on setting the Final Tie-in Point & the Lanyard Position during the Rigging Process to cause the collapse of the system which dragged the Tree Climber down from 15m height above to land on a pile of wooden debris. No equipment failure was detected by any party & no Safety Violation of ANSI Z133.1 (2006) was observed by the Station Manager. However, the technique of using a Figure-8 Friction Device on top of the tree to be controlled by the Tree Climber, instead of under by the Groundmen, is not an international practice nor recommended by ISA HK/China. This may be a technique self-invented by the Tree Climber at the time, who perhaps became over-confident with his own skills & experience, although this particular Tree Climber is known to have climbed for as little as only 2.5 years in all. Then when the system failed, he fell with it as well.

Tree Work is very dangerous indeed !! If an Independent Practicing Arborist (IPA), or even an experienced Certified Tree Worker (CTW) was present to supervise the work instead of letting some young climbers to go free with their zeal, this Tree Work Accident may be unlikely to have happened. This young man who was said to have punctured his lung & fractured some bones although luckily surviving the ordeal, may leave a shadow in the back of his mind to stay with him in his future climbing career. We also do not know how his injury would impair his ability to climb any faster or higher upon recovery. The next few weeks will be critical for him to tell.

There is a famous James Bond movie called "You Only Live Twice" who depicted this romantic agent to 'die' & then come back to life to accomplish his mission impossible. For Tree Climbers, we could only wish this can also be true, instead of "You Only Fail Once" ...

Posted by China Arborist Association at 5:40 PM No comments: