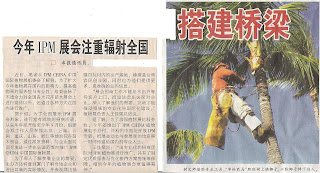 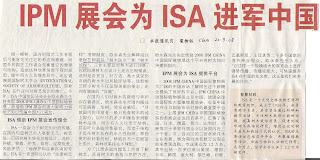 "Trees are good for the community. Trees need care like human beings. Arborists are the Tree Care Professionals."
Posted by China Arborist Association at 4:57 PM No comments: 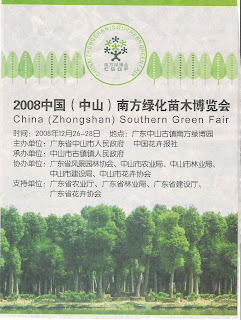 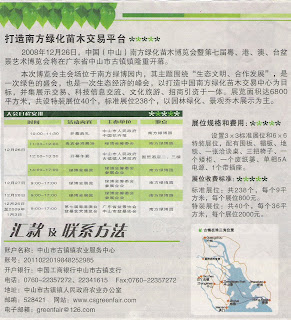 China is within the territory of ISA HK/China & all the time, we have been waiting for the right opportunity to promote ISA Arboriculture into there with relentless effort. Now with the joining of KM Li & Tony Ng as Deputy Station Manager, the Station Manager finally has additional energy to spare for exploring this vast & open country. China may remain as the final frontier for ISA Arboriculture with its vast territory, huge population & countless billions of trees. ISA could be seen with a chip of the puzzle missing if China does not join in, & ISA HK/China will take up this mission with our name bearing on it.

After signing for the biggest Flower Show called IPM in China for this December, ISA HK/China has yet again signed up for the 2008 China Southern Green Fair (CSGF) which may be a little smaller in scale, but will be a Trade Show of the Chinese Greenery Industry. CSGF is run in a similar fashion to TCI Expo in North America with trade people coming along as the majority. Information of the CSGF in Chinese is attached for reference.

ISA HK/China has managed to persuade both IPM & CSGF to put in education sessions & Tree Climbing Demonstration for us to promote ISA Arboriculture in their Show. This may be also the first time that in such kind of important Flower Show in China, the organizer has agreed for an international research & education organization to put up seminars for public education. In the past, this kind of Show would not mix in the conference element, since they were organized for buying & selling only, not public education. Therefore, when the Station Manager proposed to provide free seminar & demonstration to the Chinese organizer before signing, they did raise their eyebrows as to why we wanted to offer that.

ISA HK/China has explained in detail the ISA organization & mission to the Chinese organizers in order to get a place at these popular events. China has a very different landscaping system to HK in that they have Landscape Engineers only in their Landscape Bureau to master their greenery, similar to Nparks in Singapore in a way. Landscaping is viewed by the Chinese as part of engineering & their Landscape Engineers would need to look after trees from cradle to grave from design, installation, maintenance, regular inspection, risk assessment to final removal. ISA Arboriculture appears to fit in well with the Chinese mentality in that both are looking for research & development, & sustainability of tree care. We have appeared to talk in the same scientific language on trees with similar concerns on practicality & functions.

In our discussion with the Chinese experts so far, they have great appreciation in our Independent Practicing Arborist (IPA) system in that an IPA can write, climb, rig, operate chainsaws with international vision & connection. IPA is something that the Chinese Landscaping System does not currently have in equivalent at present. They have also appeared to favour our Certified Tree Worker (CTW) credential with respect to Tree Work to be regarded as not the same as construction work, & must be performed by specialists trained in the field for supervision & execution. Municipal Tree Work in China is performed by greenery workers of their own Landscape Bureau, supervised by their own Tree Experts, & not by common construction companies.

In a shorter term, ISA HK/China can see a great future for the CTW credential to develop in China, since CTW exam can be conducted in Chinese. CTW carries the basics in Tree Work knowledge & practice, like cabling & bracing, safety requirement, pruning & rigging. With the billions of trees in China in their 900 cities & their lack of ability in understanding English, CTW may fit in well with their current landscaping system. On the other hand, CA exam in our territory is conducted in English only since CA is required to connect to the world & need to advance themselves with international knowledge in CEU. CEU is currently conducted in English only in our territory.To translate the knowledge into English is also beyond the ability of ISA HK/China at present & then what about all the latest research that comes out in ISA nearly every month? It would therefore defeat logic to have our local CA not able to master adequate English, nevermind the IPA which the Chinese have appreciated so much.

We anticipate our promotion of ISA to spark off like firework in IPM & CSGF later on in December. Our Tree Climbers will also get their chance to flash off their feathers in front of an astonishing Chinese audience, who would not believe Tree Climbing could be carried out by ropes & harnesses for Structural Pruning & Rigging in a tree. Tree Climbing & IPA appear be the advantages for ISA HK/China to enter China & may we take maximum benefit out of them.

ISA HK/China really has the vision to develop China from now on, rather than to stay forever in tiny HK. May anyone willing to join us stand by our side, & we shall march in together to make history for their trees in this Land of Old Dragons.

Posted by China Arborist Association at 3:16 AM No comments: