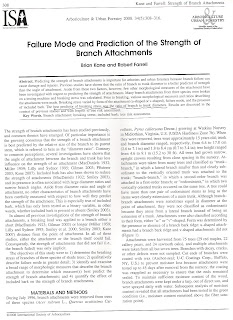 Attached is the latest research from ISA on Branch Attachment Strength (BAS) for anyone interested in the subject.

BAS is important in Tree Inspection & Risk Assessment in our territory since the two fatal Tree Failure cases in Ngau Tau Kok of 2006 & Stanley in 2008 both appeared to involve branch failure at attachment point rather than the common Root Crown Failure (RCF) which would topple the whole tree instantly. On the other hand, it appeared to be more common to have RCF in our territory since concrete paving is usually given to cover root zone of our city trees for public convenience. However, fatality case due to RCF has not been detected by this Station so far in our reports, although property damages appeared to be the sole outcome of this failure.

The research attached has re-iterated the common knowledge of Strong Branch Attachment would appear in a branch union where the diameter of the branch is less than half the diameter of the stem at the connection point. Nearly all Certified Arborists (CA) would have studied this for their exam, although some examples of deviation were also given to provide another insight for this conventional concept. The research also mentioned the BAS on other types of branch connection such as Included Bark & the results appeared to confirm the traditional findings.

The mathematics given in this research may be way beyond the exam domains of CA, & may the CA credential taken to be an entry into Professional Arboriculture rather than an end to learning. Our territory now has the Independent Practicing Arborist (IPA) credential which is the target after becoming a CA & every intention is to install the IPA as respected as any other professional status especially for entering China. Only by continuously upgrading & updating the knowledge of our profession that it will be accepted & respected in our territory. The Station Manger was only in Court last week for a Tree Dispute law case & he can very well say that IPA is one hail of skills to face the Cross Examination of the articulate Queen's Counsels on the opposite side.

Back to the attached research, the Station Manger apologizes again for the funny underlining in the attached pages since he was reading the article while travelling on a bus to ETF. Please ignore the underlining if anyone does not see any significance in it.

Posted by China Arborist Association at 3:01 AM No comments: