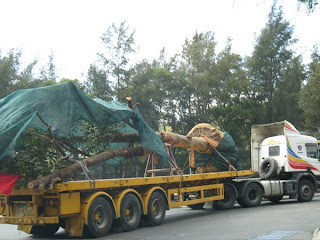 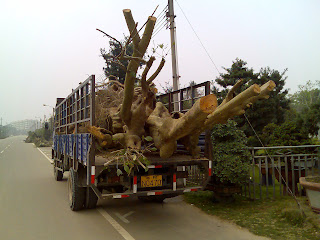 In HK, a Tree is defined in a peculiar way.

In accordance with the Govt Guidelines of Environment, Transport & Works Bureau Technical Circular no. 3/2006 & Lands Administration Office Practice Note no. 7/2007, "A plant is considered as a tree is its trunk diameter measures 95 mm or more at a height of 1.3 m above the ground level."

Under such Guidelines, bananas, bamboos, large shrubs & palms meeting the above size requirement would all become ' Trees' in Govt land & projects. With this definition in force, these ' Trees' would need to be 'preserved' under a hierarchy of ' Retention first; if not, try Transplantation; if still not, apply for Removal' . In the case of Removal, there is a requirement of a 'Compensatory Planting' at a 1 : 1 ratio to pay off the debt upon construction completion, with the space to be provided by the applicant to fit them all in, unless under pure justification. Over-crowding & congestion will be the burden of the developer or management at their own risk.

It is not known internationally that bananas, bamboos & palms would be classified as ' Trees' in Biological terms or even by common sense. Different Biologists in different parts of the world seem to define ' Trees' differently. However, it is not to the knowledge of ISA HK/China that as undeveloped as African States would regard bananas & bamboos as ' Trees'. In the primitive research of ISA HK/China, it appeared that the famous Wikipedia online can provide a detailed definition for a Tree in the following link: http://en.wikipedia.org/wiki/Tree . Many other links have been approached to look for detailed explanation of a ' Tree' but the Wikipedia so far appeared to provide the best answer. Without diving into the complicated taxonomical explanation of many of the research, a Tree appeared to be generally accepted to be a plant with a lot of wood, tall, long-living & with a prominent central leader. Some Trees would live for thousands of years & some are over a hundred meters tall. Woods from Trees are generally good construction material & are suitable for furniture making. Bananas, bamboos & palms are not known to meet all these requirements.

Recently in the UK, a famous legal case between a developer & local authority has led to a 12,000 word legal definition of a ' Tree' ( http://www.telegraph.co.uk/news/newstopics/politics/lawandorder/4613654/Judge-takes-12000-words-to-define-a-tree.html) in High Court. The Lord Judge making the statement had frankly said that there had not been a statutory definition a ' Tree' in British history, & this explanation would provide a precedent in Britain.

One of the consequences of having Trees defined as in the Guidelines of HK above is that large ' Trees' would need to be 'preserved' in accordance with the hierarchy of Retention, Transplantation before Removal. This has led to grievances from the construction sector & eventually to a well distributed complaint by a Mr. Lo Tung in Sep 2008 as per attached (http://isahkchina.blogspot.com/2008/09/isa-hkchina-reply-on-tree-transplanting.html), which was copied to all sound members of the HK society. While Lo Tung's complaint caused as little as a ripple in HK, the Stanley Tree Failure of 27.8.2008 that killed, eventually led to a tidal wave for public attention. The media & public were both questioning the wisdom of preserving Trees out of sentiment against safety. HK appeared to re-think again.

It is a know fact that the width of most lorry bed in HK is only 2.5 m wide. In transplanting large trees with a sizeable canopy, the width of most lorries simply could not fit in. Therefore, in order to force this mature tree onto the lorry for transport, the canopy & sometimes the rootball are 'topped' to fit. Then the clients would not accept Topping because it is regarded to be a bad arboricultural practice. Some of such photos are attached in here for public viewing. Now should we blame the contractors for bad work or shall we stake out the parties initiating the ' Transplant' for the decision ??

It appeared that public funding has been squandered for unnecessary ' Tree Transplant' many a times in HK in the past. With now the HK Administration reviewing afresh the Tree Policies with specific attention for public safety in HK, would there be reform & who should be invited in to help make decisions?

"Trees are good for the community. Trees need care like human beings. Arborists are the Tree Care Professionals."
Posted by China Arborist Association at 5:13 PM 27 comments: