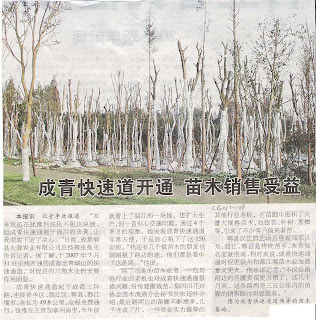 Attached are 3 sets of recent Tree News from a national newspaper in China:

1. How to re-vitalize declining Mature Trees

China experts have correctly identified some of the causes for inducing the decline of their Mature Trees such as soil compaction & lack of irrigation. They also understood that canopy growth depends upon root growth.

However, their ways to prescribe treatment such as root trenching to add fertilizers for re-vitalizing the roots, cavity filling, Hessians wrapping of trunk & permanent staking, do deviate drastically from international practice, as so described in their research.

Can this Station tell them that their treatment would harm their trees? Oh, no. They would laugh & say: " Who are you & what is ISA? " They may also say: "What's wrong with our research? It's done by experts & we have been doing such practice for years."

Then when the trees finally die, it is an Act of God, & never anybody's fault.

China is an Old dragon when it comes to tree care. This Station will be patient & opportunistic to look for an Achilles' Heel in it.

2. Tree Production from cuttings or seeds ?

A tree farmer wrote in to advocate production with cuttings rather than from seeds, because he claimed that trees from cuttings would develop taller with straight trunk, fewer branching & smoother bark. On the contrary as claimed by him, trees grown from seeds would branch more often which would require pruning to leave behind cut scars, would grow slower & would develop a 'defective tree crown'.

This message has reflected a common belief in nursery tree production in China: ' a good landscape tree should have no Taper, with a low Live Crown Ratio & pruning is bad for a tree' .

In ETF, they do almost everything opposite to what most China tree farmers would do. ETF trees are required to have good Taper, a good Live Crown Ratio & they are constantly pruned to achieve a good Structure. ETF has found only trees grown from seeds would meet such requirement, not those from cuttings. All the work are done for two purposes: to promote good Tree Structure against wind & to promote Tree Health against pest attack. Wind is the biggest enemy of a tree & can kill it in seconds, whereas pest attack will usually take months or years. HK has typhoons to attack our trees every year. Our frequent Tree Failures should alarm us to use landscape trees with good structure to minimize risks. And yet our brothers & sisters are promoting it the other way round --- for flowering only??

China is unlikely to follow the world unless HK can move first in proper Arboriculture. Can we?

3. Topped trees in nurseries along motorway

The topped trees with trunk wrapping so shown grew in recent nurseries situated along a motorway in China. They would appear more like a Tree Cemetery to Arborists rather than any tree farm. The opening of the motorway has attracted more tree farms to be located along the way, inducing more trees to be topped for landscape purchase over there.

Quite a number of trees shown in the photo appeared to be dug out from the wilderness rather than from nursery grown. If the attitude of using Young Trees for landscape not respected, more Mature Trees in the forest will be destroyed this way for their so-called 'Instant Effect'. Soon there will be holes here & there in their forest. Is this the way they want it ?

The ISA Mission - Through research, technology, and education, promote the professional practice of arboriculture and foster a greater public awareness of the benefits of trees. (http://www.isa-arbor.com/)
Posted by China Arborist Association at 12:10 AM No comments: 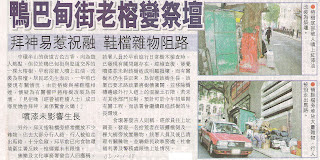 Attached newspaper cutting shows a case of Tree Vandalism which would cause tree damage similar to that on a construction site.

An old Ficus in Aberdeen Street was believed to have a Spirit living in it & was turned into an altar with red paint (for good luck?) & incense burning to please the High Command inside day in day out. The incident obviously happened due to ignorance & if the tree really has Spirit in it, logic would advise that the 'House of God' would not like to be smoked & burnt to death by its worshippers day after day. It just does not make sense.

This obvious case of Tree Vandalism has caused several Govt Depts to spend resources & to take action to see into it. In a way, the scheduled programs of the Depts may have been disrupted in order to entertain this public complaint. Other more constructive work to serve & build our society may be postponed so that this highlighted incident can be handled. Then who would lose out in the end? Would it not be us? And it is for what?

A tree functions on its own like the running of a Govt. A tree would make its income by Photosynthesis (taxation), & then use it for Growth (construction), Defense (security), Maintenance (social services) & Storage (finance). If a particular event would require the tree to spend extra effort to focus on something, e.g. a pest outbreak, the tree would then need to divert resources from the other development to fight a course. Then the other sectors of development would suffer.

The same case can be applied for this Tree Vandalism. Resources are now diverted to entertain the complaint, whereas the normal routines of the Depts may be disrupted. This Station would then ask who would be the ultimate victims of the event? And is it justified?

It appears that it is the public who should be educated with proper Arboriculture & Tree Care, not anybody else.

The ISA Mission - Through research, technology, and education, promote the professional practice of arboriculture and foster a greater public awareness of the benefits of trees. (http://www.isa-arbor.com/)
Posted by China Arborist Association at 6:53 PM No comments: