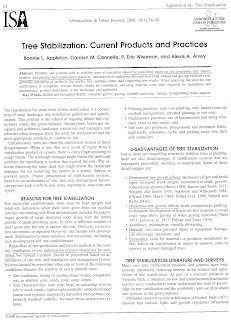 Attached is the latest research published by ISA on Tree Staking.

Tree Staking is a requirement in nearly every landscape contract in HK & China nowadays. The general spirit is that it should be done with the strongest material as possible & should be there for as long as possible, because it is thought that Tree Staking would stabilize the tree in wind & storm. Another obvious reason for staking may be the undersized rootball of nursery trees coming in from China which can not stand itself after installation & would require staking. On the other hand, if a wind force of typhoon magnitude would strike directly upon a tree secured with a rigid staking system, maybe if the system can stand the wind, the tree is likely to break or snap (basic Tree Biomechanics).

HK is full of Tree Staking lasting for years, especially in the private sector. Some stronger one even appeared to last forever. This latest ISA research has given comparison for the pros & cons of Tree Staking & has provided the latest information on current practice. If anyone would disagree with it, please give this Station the opposite research (not a point of view or from a coffee magazine, please) & we are obliged to publish it to show the world. This Station is always fact-finding & truth-telling, & we worship nothing but fact & truth.

Therefore, should our territory carry on the 'permanent staking' for our trees which is required in nearly every landscape specification today? Is the money thrown into Tree Staking justified for the result? Do we get better trees, or poorer, in this manner ?

Please try to find the answers to these questions in the attached article.

The ISA Mission - Through research, technology, and education, promote the professional practice of arboriculture and foster a greater public awareness of the benefits of trees. (http://www.isa-arbor.com/)
Posted by China Arborist Association at 11:33 PM No comments: 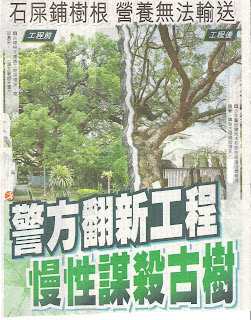 It is all another sad piece of news that another of our Old & Valuable Tree (OVT) was apparently damaged by construction work in Sheung Shui recently.

The attached news described the OVT apparently suffered from root suffocation by concrete paving during construction work which led to diebacks in canopy. The relevant authority, after being informed, took measure to mitigate the problem with raised platform & this tree is now placed under observation to hope for the best. For mature tree of this kind, it may take a long time to recover, if ever.

Although our Govt have already issued contractual guidelines to protect our OVT & many other mature trees, from event as described, such measures did not seem to fall on the right ears. This Station feels our Govt have done a lot of work to protect & preserve our trees with the many seminars & training within Depts which enthusiastically supported the program. However, despite nearly 30 seminars by the rhetoric Station Manager at CITA shouting for reasons to protect & care for our trees, little change can be seen from people involved in the work. CITA students were there because there was compulsion & the lectures became vivid show to a lot of them, rather than genuine converting. Tree design & specification carry on pretty much the same, & the same quality trees from China continue to arrive to plant our landscape.

It may be true that our public would want to genuinely protect our trees consciously. However, in construction or development, it may be more convenient to carry out the work without regard to existing trees which can be viewed as an obstacle to progress. When compared to dry commercial interest, trees may have to give way to become the loser. To some after all, they are only ' trees'. Why should they deserve all the respect?

Back to the analogy of Opium Smoking in Older China, most people would thought it as wrong but would not stop doing it. Outcry was ignored. Then when the gun boats arrived, many went on praying & blamed on everything else. Should the same happen to our trees when the typhoon arrives?

This Station wonders what would happen if the same tree damage above would occur in Singapore?

The ISA Mission - Through research, technology, and education, promote the professional practice of arboriculture and foster a greater public awareness of the benefits of trees. (http://www.isa-arbor.com/)
Posted by China Arborist Association at 12:53 AM No comments: