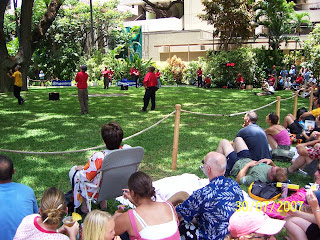 What a pleasure it was to be in a paradise of sunshine, blue ocean, big surf & friendly people. The world has been left behind for a week for all 9 of us from ISA HK/China attending the 2007 ISA International Conference in Honolulu, & what an experience it was to meet the world ! Our eyes were really opened.

There are far too many events to report in a brief Station Mail about this Conference. We have already organized an Informal Dinner for briefing with more than 60 Station Members attending the presentations. Being there, ISA HK/China has seen how far the world of Arboriculture has advanced & we have never realized that there are so many research institutes & agencies studying Arboriculture around the globe. The lectures presented in the Conference were very educational & useful indeed.

Countries from around the world including HK/China, Japan, Philippines, Singapore, Australia & New Zealand attended a friendly meeting to share experience in Arbor development in various regions. Everybody shared their views & it was interesting to see so many people paid attention to our development in HK/China. Many useful ideas were raised & taken note by various parties. The success of Japan was particularly interesting to us with regard to their Tree Doctors & Tree Climbing development within such a short period. ISA HK/China has issued a positive message to Japan that we want to make friends with them & the message was well responded.

The Station Manager has also raised the priority in developing ISA in English speaking countries in Asia like Philippines, Vietnam, Thailand, Burma, Sri Lanka & India to tap the fast growing economy & population there. Traditionally & culturally, Trees are Gods in many parts of Asia. Developing proper tree care will fit into the mentality of these societies who may have never heard of ISA before.

ISA Conferences are all about education & experience sharing. The Hawaiian Conference was no exception. However, the Conference sessions were run concurrently for Utility, Municipal, R& D, Commercial Arboriculture & Tree Climbing. It then became rather a decision making process on choosing which one was best to attend.

Tremendous knowledge was packed in each training session which usually lasted only 30 minutes. Lectures would usually begin at 7 am & early bird would catch the worm. Presenters included internationally famous Prof Kane, Prof Gilman, Dr. Smiley & Nelda Matheny. Topics varied from Structural Tree Cells, Touch step Potential, Tree Failures to Mature Tree Management. It would feel that the world of Arboriculture suddenly fell on us in such weight & impact that we seemed to be converted anew after all the learning.

To be honest, the food & drinks could only be considered basic at the Conference when comparing to what we are used to in HK. However, the knowledge was plentiful & deep. If it is the knowledge & connection that we are looking for in a conference, ISA Conference is definitely the place.

ISA HK/China has raised practical questions like how we can inspect & report our thousands of trees failed after a typhoon & trees in our territory would be cleared as soon as they failed to avoid traffic obstruction. ISA HK/China has also received training materials from ITFD which would be useful for training our own tree assessors in future. The Station Manager raised the question on assessing standards between ISA & USFS & was told that either would be deemed acceptable in most Tree Inspection cases.

A training session for ITFD Tree Assessors may be held at the 2008 Asia Pacific Arbor Conference in Brisbane to invite all interested parties from Asian countries to attend.

This was a joyful & vibrant event !

The Station Manager has seen for the first time how International Tree Climbers competed for their best in Throwline, Footlocking, Aerial Rescue & Work Climb with such diversities in equipment & techniques. The boy & girl Tree Climbers from Fung Kai School were also introduced publicly at the opening session of ITCC by the organizers. This was an exceptional honour for ISA HK/China indeed.

The Station Manager has set aside priority on ITCC events because Tree Climbing is something which is hard to self-study alone. Many humble learning of techniques & equipment have been acquired from international experts for bringing back to our territory for exploitation. Seeing was believing most of the time. The Station Manager has noticed that most Tree Climbers are usually quiet, humble & deep thinking. Their only focus is on trees & techniques, which would really make them a breed of their own.

The ITCC has gathered the world's best Tree Climbers to compete for events simulated from everyday work. Trees in Hawaii were also beautiful & wide spreading. The Men's Footlocking competitors were racing at approx. 1 second per meter for a 15 m climb, whereas the Women's were not far behind with less than 18 seconds for 12 m. The Men's Work Climb was full of cheers & feats that could only be felt if you were there. In the Aerial Rescue, different types of techniques form various countries were demonstrated. The ITCC events were full of amazement to we beginner climbers from HK/China & it was such a pleasure to be there.

It was a total success for all 9 of us attending the 2007 ISA International Conference in Hawaii. As said before, ISA Conferences are full of good education so designed to upgrade the participants in the latest knowledge. They aim to provide research & education at the cutting edge to advance arboriculture in the best manner. The week we spent there was well worth the long travel & jetlag. All of us have enjoyed the trip very much.

The next major Conference for ISA HK/China would be the Inaugural Asia Pacific Arboricultural Conference in Brisbane from May 9 - 14, 2008. This Conference will focus on specific topics of relevance to the Asia Pacific Region such as tree inspection, tree failures & pest problems. Brisbane is much closer to HK with daily direct flight & with a negligible 2-3 hour jetlag. This Station hopes to bring an even bigger delegation to Brisbane with a climbing team to compete in the regional championship. 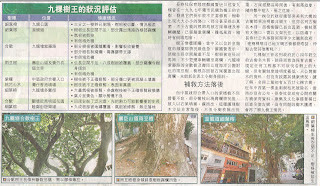 Attached & below are recent Tree News published by the Media on the latest situation of some of our Old & Valuable Trees (OVT) in HK. The contents are self-explanatory & there is no need for this Station to put in additional comments.

Please kindly note Ken So of the Conversation Association of HK (CAHK) is an ISA CA/CTW & also a Proctor in our Station. We have every faith in him speaking out with Integrity, Professionalism & Participation with an attitude of fact-finding & truth-telling on our local tree affairs. Trees are the community centre of all wildlife on land & protecting trees is indeed protecting our environment.

Therefore, Ken, keep up the good work ! Fly our flag & protect our trees. You will have everybody's support if you are doing the right thing, openly or under.