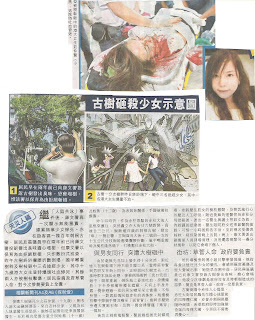 This Station has received enough messages & phone calls to demand a Station Mail on the hot topic of the killing Erythrina in Stanley on 27.8.08 from Station Members & media. Please kindly note ISA HK/China is a research & education organization only. We do not take side for anybody, & the information given in this Station Mail will take the attitude of an Independent Practicing Arborist (IPA) to be impartial, fact-finding & truth-telling under the details gathered by this Station.

Before anything else, ISA HK/China would like to mourn the victim of the event with grief, who was a 19 year old fair lady having a bright future ahead of her. We wish to offer our deepest condolence to her family & pray for her soul to rest in peace in heaven.

It must also be stated that the Station Manager issuing this Station Mail has not been on site, & has never seen or touched this fallen tree before the failure. Therefore, anything written down here would come from media reports only & shall be deemed as invalid for any legal or professional investigation.

From information gathered so far, it appeared that this tree failed on a calm sunny afternoon without warning to hit the passing crowd underneath causing fatality. This tree was claimed to have been inspected by a Govt Dept only a few days before the failure. It was also said to have undergone Tomograph for decay, & was quoted with result as 'acceptable'.

The remaining parts of the fallen tree were quickly removed for any post-mortem investigation. Without such, it would be hard to study the failed portion & to determine whether the branch was failing out of heavy end-weight, or from an internal decay with crack development eventually leading to breakage. Post-mortem is vital to assess the cause of the failure & without such, much of the comments here would become guesswork & IPA must not guess but state from facts.

Wind damage might not be a direct cause for the branch breakage as the weather during the failure was sunny & calm. Tree Experts suspected Erythrina Gall Wasps had weakened the tree but again, shell thickness would need to be determined against end weight & tree structure. Decay development, internal cracks, canker damage & branch structure would all need to be assessed for a probable explanation. Any of the above would require measurement of the tree before failure & after failure. It would be like forensic experts examining a murder case. Playing Tree Detective is part of IPA work.

Therefore, in view of the lack of measurements & technical details before & after the failure, for any responsible IPA, no conclusion regarding the cause of the failure can be easily drawn except this tree had failed in an unexpected circumstance. This Station is very sure that no Govt Dept in any civilized world would like to see a tree to fail to kill a civilian. Whether the incident involved Negligence or not, it would be up to the Court to decide.

While we mourn the deceased with pain, we may at the same time need to look for the future to avoid similar incident. Our Tree Professionals may wish to remind our authorities to divert extra resources to pick out those Mature Trees which have turned into Time Bombs already in our city. IPA may be deployed to provide third party opinion to explain to the public. More work will need to be done.

ISA HK/China does not look forward to issue Station Mail of this kind with grief, & sincerely wish our trees can be our assets instead of liabilities in our loving city.

ISA HK/China wishes to thank all those who have sent in feedback on the Independent Practicing Arborist (IPA) concept mentioned below. Some have even copied their feedback all the way to ISA HQ to make sure that their views are noticed. We wish to thank them all indeed.

By now, this Station can safely say that the IPA concept is receiving an overwhelming support from our Station Members. Among all feedback received, all have given approval for the IPA concept with the exception of one. It is likely that the IPA system will go ahead in the near future in our territory.

It is important to understand that the IPA system is not designed only for HK, but also for the greater part of our territory which includes Macau, Taiwan & China. The IPA concept incorporates knowledge, practical skills, working experience, international networking & communication ability. It is known that China operates a very different landscape system to HK & they may claim that they have hundreds of thousands of Tree Experts in their Govt & Universities. However, it would be difficult for them to say the same that they also have an equivalent of IPA when they meet us. IPA would give ISA HK/China an edge to penetrate into China & be respected when promote ISA arboriculture there. This was proven in our initial contacts with the Chinese officials so far.

It is also worth noticing that In the IPA requirement, the Certified Tree Worker (CTW) credential is not just all about tree climbing like some of our Station Members have acknowledged. As listed in the CTW exam requirement in ISA, the written part of the CTW exam tests for pruning, removal, cabling and safety. Chainsaw uses is also part of the knowledge requirement in the CTW credential. The practical part of the CTW exam also tests for Tree Inspection & Risk Assessment in front of a real tree before the climb. The CTW credential tests for basic knowledge & skills of Tree Work in a realistic environment, which is something an IPA is deemed to possess.

Even among a general approval for the IPA system in HK, this Station has the following consideration & comments before implementing the IPA system:

1. The IPA system is aimed for those CA who wishes to go into self-practice only. Those who do not, need not bother with IPA.

2. The IPA system will wait for until at least 50 no. of our CA has re-certified. This is expected to be within a year or two when more of our current CA have expired the 3 year validity. We also need to give all those who are interested time to take their CTW & attend ISA International Conferences for internatinal networking.

3. The IPA system will take the form of voluntary registration in ISA HK/China. Those who meets the requirements will join a short list of IPA which will be distributed to anybody interested to contact an IPA. This list will be updated from time to time to maintain freshness.

4. The IPA system will go through a Station vote before implementation later.

5. Anyone can call himself/herself an IPA at present, although ISA HK/China would provide recommendation of requirements to anyone enquiring, & the IPA will face his/her own consequence alone once contracted.

We expect our future IPA to stand strong & respected in our territory of HK, Macau, Taiwan & China. HK has always been our testing ground for developing ISA Arboriculture with her western civilization & legal system so far. However, HK is only known to be a dot in Greater China & our vision is not limited to just HK alone. At present, China has over 900 cities with size & population comparable to HK. China also has countless billions of trees. ISA HK/China has set our eyes for Greater China & have already met initial successes in our contacts up there. The Chinese have so far loved us like missing relatives in every meeting & have promised to put up seminars, tree climbing demonstration & even a parade with our climbers in full gears to flash around the audience in their Flower Shows. The initial welcome there have been most encouraging. We must carry on the steam.

With now China starting up much more enthusiastic than HK a few years ago, would ISA HK/China not pay attention to this much bigger & greener market, where Arborists are warmly welcomed?

Thank you all again for your good support & ISA HK/China will bring you new heights in China very soon.

The ISA Mission - Through research, technology, and education, promote the professional practice of arboriculture and foster a greater public awareness of the benefits of trees. (www.isa-arbor.com)
Posted by China Arborist Association at 6:22 PM 2 comments: 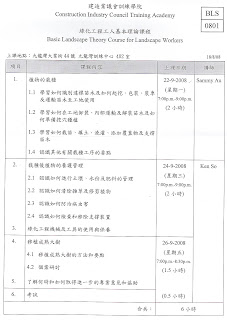 Further to the Station Mail on the CICTA BLS training given below, please kindly find the syllabus of the training for your additional information. Please kindly note the first 2 classes are already full & the 3rd class is having limited vacancy for anyone interested to join.

As from the contents of the syllabus so shown, the BLS training is universal & practical for landscape workers, supervisors, management or anybody interested to learn how to conduct landscape work on site properly. It is a certification course & the credential given to the successful candidates will upgrade the image of the individuals & the company they work for. At present, landscape workers are not categorized in the construction worker registration scheme. The BLS credential will promote the status of the working individuals & may be favoured by clients for employment or contract administration in the near future.