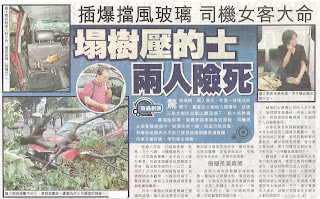 Attached are two sets of recent Tree News in HK drawing our attention:

According to the media report, an Aleurites moluccana of approx. 12m x 0.4m dia. was waving & suddenly fell to hit a passing taxi, crushing the front part of the car & poking through the front seat with failed branches. Luckily no one was sitting in the front passenger seat. The taxi driver & the lady passenger at the back both escaped a narrow kill. Should the angle of fall deviated by a little to the side or back, either the driver or the passenger would be hit right in the head, potentially causing serious injury or even death ...

It was reported that the failed tree had mushroom growth on the root collar & the failure appeared to be a structural defect with wind loading.

An interesting point to note in this incident is that the failed tree appeared to be in good health with sound foliage from the photo shown. A lot of our local Tree Inspectors, be they landscapers or others, would usually determine the health & condition of a tree just by looking at the foliage. It does not seem to be common to hear anyone commenting on branch attachment, lattice geometry, wind loading & pest problems with potential to fail. It would be regarded that any tree with good foliage, the tree would be healthy & safe. By Arborist standards, having good foliage alone does not mean the tree is safe in wind. In fact, it is usually quite the opposite because the bigger the crown, the higher is the liability for wind loading on that tree.

The crown of a tree is similar to the sail of a boat. If the crown is full but the branch attachments are weak, it would be like a sailing rig with weak connections. In wind, weaker connections would fail. However, our conventional practice appears to be that a Tree Inspector would only look at a tree for foliage density & colour. Structure & Wind Loading would not be emphasized or may even be missed out. Trees are massive structures with a potential to kill if failed, & trees are not pot plants or tomatoes. We can not judge the safety of a tree by horticultural standards alone. It is sad that Tree Failures in our urban settings are usually named an Act of God. Inadequate Risk Management would be rarely mentioned.

This unfortunate incident is likely to initiate insurance claim & may even bring Law suit from the victim's side. After all, they have had a traumatic experience never to be expected. If Arborist is involved in acting as an Expert Witness for any side in Court, quite likely the incident would be proven not an Act of God. Records & documentation would be investigated & the liabilities would be ascertained by the lawyers. Arborist would only provide technical support.

Would anyone be interested to take up the case?

Someone wrote to the media complaining Tree Labels were incorrectly tagged for some public trees in Tai Po. The relevant Govt Dept have instructed the contractor responsible to rectify the placement & this Station does not see any major threat in messing up a few tree tags by accident indeed. HK has a culture of complaint & insignificant incident as such would be blown to distortion at times.

However, what is raising the attention of this Station for this event is really the design of the tree tags. They appeared to be sheets of printer paper inserted inside transparent plastic bags with the opening on top to collect rain or irrigation water. If water would get inside the bag, the paper is likely to dissolve & mosquito breeding is likely to happen.

Would it not be better if laminated label is to be used instead ? Laminated labels are equally cheap & available, & can be replaced with ease just as good as the existing one.