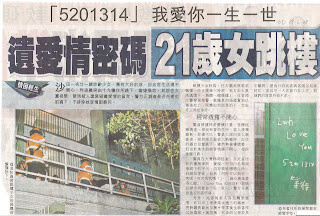 Attached are two sets of recent Tree News from our local media:

Tree Failures do not become much of any exciting news in our territory anymore with coverage in newspapers just to fill up spaces. As time went along, even our Tree Lovers & Tree Experts who advocated loudly against tree failures in the past, appeared to tone down their voices nowadays. Would it be because ISA HK/China is gradually taking over them with facts & science?

For the two reported cases of failure, in one a tree of +10m tall fell & hit a passing car, causing serious damage to the car & injured a passenger inside in Tuen Mun. Then in the second an eighty year old woman was hit by a falling branch on the back in WTS. She was injured & hospitalized.

In the WTS incident, the tree owner said that they will employ ' Tree Experts' to inspect all trees inside their premises to prevent future accidents. This Station is doubtful if Arborists would be employed since everyone else appeared to be 'Tree Experts' in our territory except Arborists for the public. 'Specialist' Contractors are usually employed in view of their 'experience'.

This Station has a long way to go to promote ourselves & our profession, despite some initial successes in our landscape industry.

(B) Tree Climbing to heal the Suicidal

This heart breaking news of a young lady jumping off the roof for 'love' is truly saddening. What a wasteful spoil of life & she is not the only one killed in this manner this month already. HK's young appeared to be losing fighting spirit to confront adversities when compared to the generation of the Station Manager in the 1970's. People would mostly commit suicide for money (or lack of it) in those tough old days.

This Station has seen research about the mentality of the suicidal when the process was actually being committed. Some research (Sorry, no quote) mentioned that over half the suicidal were actually regretting half way through their dying, but could not reverse once the process got started. Imagine how someone can try to stop herself from falling once she jumped off a roof. Wouldn't it be too late to stop?

In order for these desperate to get a second chance not to waste their valuable life due to irregular mental impulse, a process should be set up for them to try dieing, but not going to die. This Station has thought of Tree Climbing (see photo in attachment) as a possible alternative.

Vertical tree climbing is challenging death by dangling someone dozens of feet up high without touching anything except the rope. Any failure of equipment or misuse of technique will be enough to be fatal. This would give a sensation of half way from jumping off a roof but held stationery there for a chance to look back into one's valuable life. Peeping down is usually scary & any uncontrolled spin or swing by wind is enough to wreck nerves. For suicidal who wanted to try, it will be their chance for a second thought.

This Station has learned from research in Japan that Tree Climbing has medical values for the mentally depressed & suicidal. Research there has suggested that mind can be strengthened through Tree Climbing & stresses dismissed after the vigorous exercise. Any Tree Climber understands the requirement to focus while on rope. Any lack of attention will be equal to jumping off the roof.

ISA HK/China has mentioned time & time again of the benefits of Tree Climbing to the HK public. HK is a place today innovative enough to give it a try. After all, for victims who seem to be heading for a dead end & survive on medication only, what have they got to lose if they are to be put on rope under professional instruction? Tree Climbing will strengthen their muscles & mind, at a cost next to nothing when compared to conventional treatment. Why don't our doctors listen?

HK should not lose our sense of innovation after 1997.

Posted by China Arborist Association at 6:24 PM No comments: