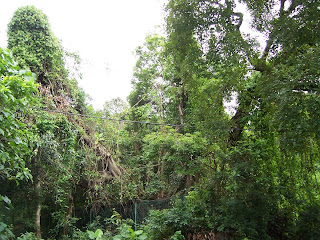 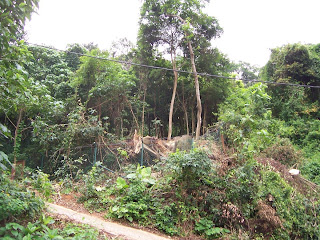 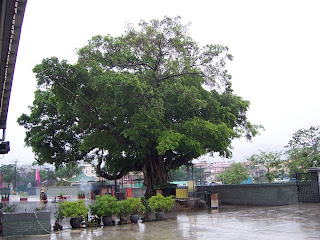 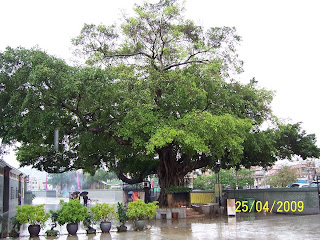 HK has never seen the Arborist Profession becoming so busy in the past quarter of April - June with a lot of the Arborists in the private sector working desperately to cope with a sudden expansion of enquiries all over town. As for the Station Manager himself, he has been working without a single day of break from mid-April to date for Govt & private projects as an Independent Practicing Arborist (IPA, http://isahkchina.blogspot.com/2008/08/isa-hkchina-independent-practicing.html) in Tree Assessment, Tree Felling & Structural Pruning. Tree Climbing & Chainsaw Operation were common place with scenes of high risk & unbearable stresses as a daily chore.

Media Interview was at the same time coming in en mass to discover the Arborist Profession as a hot topic in town. ISA HK/China has been interviewed by 3 TV stations, 2 radio stations, numerous newspapers & magazines in person & over the phone, sometimes as frequent as 5 times in a week. The public is now turning their eye on the Arborist Profession as Tree Doctors & Tree Detectives to look after our trees & a TV Drama Series is under planning for trans-China production on the daily life of Arborists & all the aerial adventures in it.

To share some of the immediate events with our Station Members of the Station Manager in his work, the followings are the highlights worthwhile for mentioning in the past few weeks alone:

This is a tree as famous as the Wishing Tree in Tai Po to the Yuen Long locals, & the Tin Hau Festival Procession will begin right underneath this tree every March with thousands of worshippers gathering around. One major horizontal limb had failed in the rain just after the 2009 Procession for this tree.

As Religion, Fung Shui & numerous opinions from 18 Village Chiefs & the District Board focused upon how to re-shape this tree to reduce risk, the Station Manger exercised his influence as an IPA to carry out the work to meet the satisfaction of all parties. A detailed Tree Assessment was first carried out to ascertain the Health & Structure of the tree & a pruning plan was devised under strict supervision of the IPA for every cut. The former Fung Kai Students so trained & are obedient to the Station Manager were hand-picked for the operation & no second opinion was to be tolerated due to the sensitivity & precision involved.

During the work execution, Yellow Rain persisted all the way. No one would shy away from his position & the Crown Reduction was faithfully completed in 2 days to the satisfaction of every party at the end. Photos of the tree before & after the event are attached for this memorable occasion for general reference. Arborists have provided an example for other Heritage Trees in HK to follow.

2. Tree Felling at a Public Park in HK Island

Please note the location of the tree can not be disclosed without permission of the Govt Dept giving the order. However, the notice for work was given in less than 2 hours owing to the urgency confronted & the tree was a dying Casuarina of 15 m x 0.6 m dia. trunk with dead wood as hard as iron. The Station Manager & his favourite Fung Kai Student KW Lee were given 4 hours to complete the job from 3pm - 7pm despite inclement weather with Tree Climbing & Rigging as the only option to take down this tree. Aerial Platform could not enter this location & there were too many properties below to perform Drop Cut.

It was again Yellow Rain & Yellow Rain all the way & photo taking was not possible. However, the ability & toughness of Arborists were demonstrated to the full to amaze the Govt Staff supervising at all times to see this hazardous tree coming down safely piece by piece in discipline & efficiency. Everyone was exhausted at the end of the operation & Arborists have won another battle against nature & adversities to show HK.

3. Felling of 9 Dead Trees in Hang On Estate, Ma On Shan

The Station Manager was called in by a landscape contractor to perform some 'Show Cut' with the intention just to amuse the supervising Management Committee of the Housing Estate as an initial arrangement for a meager sum, & then it turned out to be a full scale Tree Felling Operation with the Station Manager cutting alone as the only Tree Worker & Tree Climber with the landscape contractor & hundreds of spectators looked on as the audience for their entertainment.

The time & site restraints were the biggest challenge to take down these 9 Dead Trees of generally 20 m tall x 0.6m trunk diameter. Two of the trees also required Rigging & Road Closure was from 10am - 4pm only by a public arrangement. There were building structures liable to damages if hit by falling wood, & the spectators were not always cooperative to evict the Drop Zone by trespassing in. Two of the trees were also leaning away from the Drop Zone & had to be secured by a Tag Line to avoid hitting targets below.

As the trees were felled one by one, the public sentiment glowed from one of originally suspecting to supporting. After all, it was quite a sight to watch a 20 m tall tree coming down missing the Lamp Posts & landscape furniture underneath practically by merely inches. As the last & most dangerous tree leaning towards the Shopping Centre was preparing to come down, there was a moment of silence among the hundreds of spectators by then grasping their breath. As the tree eventually broke its fibers to give a splitting noise to fall on the designated location to fly off dust & water puddles, the crowds were frozen for 2 seconds, & then a loud round of cheers & applause blasted out after that. Most have never seen big trees coming down with such power & precision in an urban location & some have never seen Arborist in action in their life.

No picture was taken for this memorable occasion because everyone was too busy to focus on the danger & safety if only one branch did not hit the right place. The word of Arborist completing this job also quickly spread among the landscape contractor community & some are thinking again whether they would be comfortable to carry out this kind of work under their traditional method without the supervision or participation of an Arborist right now.

4. Felling of a 2.5 m diameter Celtis sinense in Tai Po

This was another job testing the ability & endurance of the Arborists as the SDU (Flying Tigers?) of the Landscape Industry with the entire 3 day working period in Yellow Rain & Thunderstorm. None of the Arborists involved stopped at that. Out of the 8 Chainsaws from 10 inch to 36 inch taking part in the operation, only one was still operational after non-stop cutting for 3 days at high speed.

This huge Celtis with co-dominant stems was highly hazardous with a crack in the trunk union & its canopy directly hanging over an electric cable which was the only power supply to the village houses nearby. There was a metal fence not to be damaged just one meter away from the trunk & Drop Cut was not a practical solution. The canopy was also covered with wild growth which had to be removed to expose the tree architecture before cutting. The entire tree weighed +10 tons & it had to be cut to 300 mm off the ground in just 3 days.

Anyone can imagine the physical exhaustion & danger with lightning flashes above the head & streaming rain to let the Arborists roll over in the soft mud swinging a 15 kg Chainsaw to cut the sections. Also, re-fueling & chain replacement had to be done with one person extending a plastic sheet to avoid water mixing in with the gasoline in the middle of a hill. The mosquitoes were like Kamakaze Pilots diving into any human flesh that they can detect & insect repellent was ineffective once mixed with the sweat & rain. The vibration of the 36 inch Chainsaw was shaking the arm muscles to numbness & the Station Manager was feeding himself with a spoon for 2 days because he could not manage chopsticks after work. This is not to mention the constant muscular pain which would roll him in bed to try to gain some sleep.

It was all good feeling of manhood & determination when the last piece of wood was eventually coming down from this monstrous tree. The sun appeared again to smile at the Arborists who have proven themselves to be a special breed of human being to defeat difficulties & to obey orders. The Arborists have again made a mark commemorable to show example of good human nature to overcome adversities, & to accomplish mission rather than just talk, talk & talk. One would feel really good to be standing on that hill to look at the results.

The above events are supposed to be educational & inspiring to anyone wanting to stay in the Arborist Profession in our territory. Arborists are praised to be a special breed & they are the SDU in the Landscape Industry. No one can really replace them.

ISA HK/China wishes to hear from anyone having similar experience to boost the Arborist Profession & is looking forward to receiving them for broadcast in Station Mail if appropriate.


Posted by China Arborist Association at 12:58 AM 4 comments: