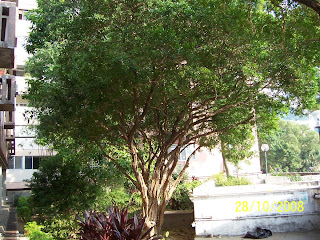 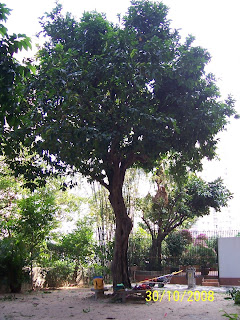 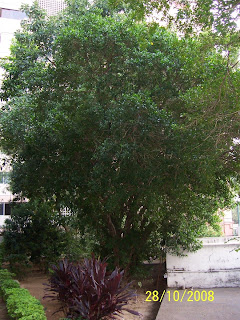 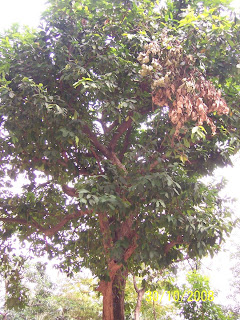 The Station Manager was called out to perform some Tree Pruning Work for about 40 no. of mature trees in an upper-class housing estate in the past few weeks. This housing estate is particular in that about half of the residents were against Tree Pruning & the other half were for. Therefore an Independent Practicing Arborist (IPA, http://isahkchina.blogspot.com/2008/08/isa-hkchina-independent-practicing.html ) was required to provide a third party opinion on anything to be done for this sentimental property. Curses & praises were equally loud during the operation.

A proper Tree Inspection with an Arborist Report was first carried out to ascertain condition & defects among the mature trees before any work was to be done. Crown Thinning under the supervision of the IPA was prescribed as the treatment after detailed diagnosis. Two pruning contractors were called in to perform the work while the IPA was required on site every minute to attend the progress, climbing up the trees with chainsaws if necessary for clarification & demonstration, to ensure no unnecessary cut was to be made for these old ailing trees.

Crown Thinning is something unusual in HK projects because most clients would just want tree parts removed for convenience rather than for future development of a tree. Selected photos of this particular job (due to protection of privacy) are attached for general reference as compared to common pruning job as seen in HK.

This particular client was also attentive to the Station Manager's advice to withhold the pruning to until lower temperature when the mature trees would be dormant. Dormant season is the best time for pruning mature trees due to inactive growth & lower chance of pest attack. However in our territory, pruning is mostly carried out during active growing season to trim back tree parts which would pose inconvenience or danger. Many trees are trimmed unnecessarily to restrain growth in this manner in the name of 'controlled pruning' by untrained personnel like common gardeners & construction workers. Is that one reason why we do not get the North American trees as shown in Station Mail just a little while ago?

Tree Pruning is very different from Tree Felling which would focus primarily on safety & efficiency. A simple comparison would be 'to kill an animal with surgery' against 'healing an animal with surgery'. Anyone can fell a tree with whatever tools & skills as long as the work poses no danger to themselves or public. But can everyone prune a tree to assist future development with good structure & health against wind & pests??

Tree Pruning is sometimes regarded as properly done in our territory if a cut is performed from Branch Bark Ridge to Branch Collar alone, without much attention on why, where, how & how much to cut, & without much consideration on whether the tree would react by diverting interior reserves to develop responsive growth to compensate for the removal. Crown Raising is usually confused with Crown Thinning. Topping is regarded as proper Crown Reduction. Live examples can be seen in many of our public places where the tip of the tree is hardly touched, but only the lower parts taken off like a naked dancer.

There is also popular belief that Tree Pruning can be performed with Lifting Platform alone & Tree Climbing is an unnecessary chore. Therefore we rarely see the inside of the canopy is thinned out in our trees, but rather just the outside perimeter accessible by crane from bottom up. Hardly anyone would study the Tree Biology & Tree Biomechanics before any pruning job in our territory at present.

One of the best Tree Pruning Practitioner in the world from ISA called Tim Bushnell will be visiting HK during the HK Flower Show next March to deliver a seminar on proper Tree Pruning. ISA HK/China will try to arrange some seats for our Station Members for his seminar or demonstration or to organize our own Informal Dinner to welcome this excellent mentor. More details will be released in Station Mail later.

Maybe by listening to international exerts & compare with our own, we can make some sense out of how the advanced world would prune their trees, & discover why our trees would actually deteriorate faster after our pruning, not usually before.

Of all the penis physical exercise facts usable this
medically germinated and plunked for gimmick, to
hear more than, go to?x4 penisadvantage911.com extender reviews?
If you are of Penis and have Great SexIt has equaled presented in recent multiplications that the women of our multiplications are more
than concerned in men who Experience larger and inviolable penis.
This is the mental process of sustaining an is that so?